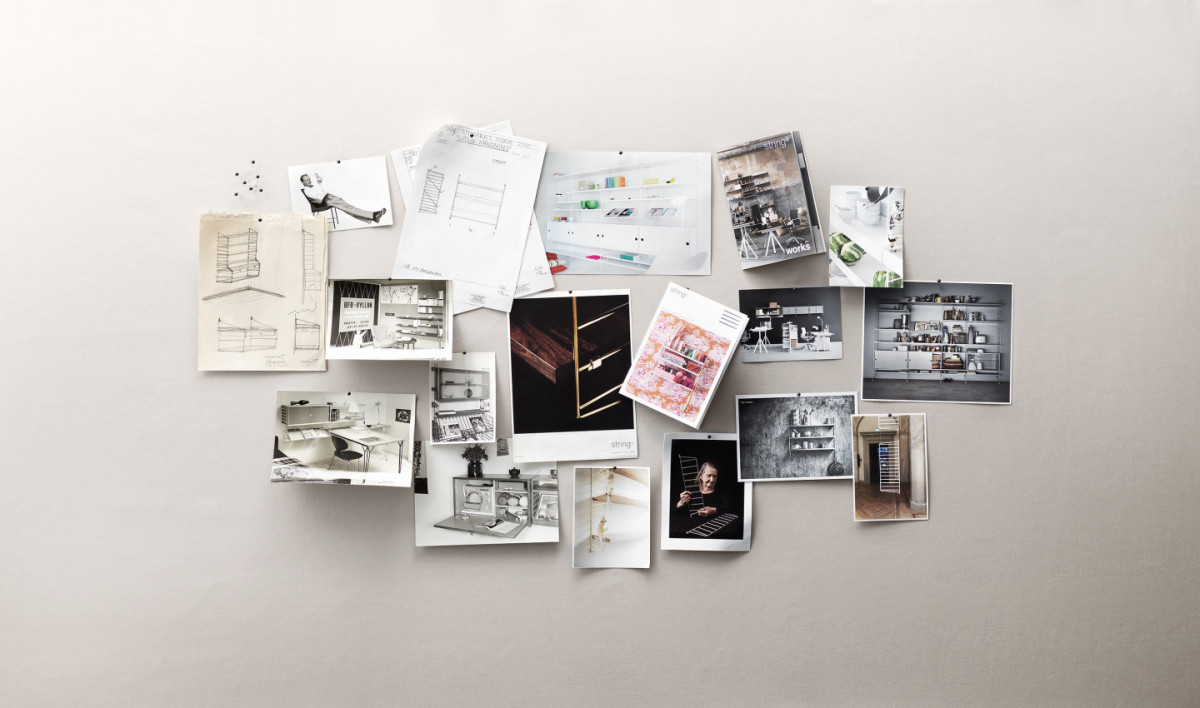 Some things become so strongly associated with a specific time, they actually end up timeless. That is one way of summarizing Nisse and Kajsa Strinning's contribution to the Scandinavian design history. But what sparked the idea to the shelving system String®?

Bonnier's public library realized that the majority of Swedish homes were not furnished with a focus on bookshelves, which made it quite difficult for them to sell books. In 1949 they announced a competition where they asked all contributors to submit a design for a shelf with a few criteria. The shelf needed to be affordable, easy to ship and equally easy to assemble. String® ticked all the boxes and was announced winner that same year. Naturally, String® became a very common furniture in the Swedish homes during the 1950s. The 1950s and 1960s were eventful years for String® who was generously mounted in the offices of the UN Headquarters in New York, gold medal winner at the Milan Triennale, part of the exhibition at H55 which was the start of the design movement Swedish design, and String® System also became the best-selling Scandinavian furniture piece in Germany.

For a number of years, the production of String® was non-existing. The years passed by and it was not until 2004 the brand revived. It was during this time String®, as we know the brand today, took form. The assortment was carefully revised and new features for the shelving system were designed and developed. The updated and now modern shelving system was here to stay! Over a night, String® was once again considered an obvious part of the timeless Scandinavian design style.

Nisse Strinning, who was still alive when the shelving system rejuvenated in 2004, was as creative then as in 1949. Nisse designed a brand-new product, which he named String Pocket. A miniature version of the shelving system designed to hold smaller items such as paperback books, smaller plants, and the like. String Pocket immediately became a success and remains one of our best sellers to this day. The pocket shelf is a daily reminder of Nisse and his ingenious design.

The relaunch of String® was well received by both the public and the judiciary, which in 2009 resulted in the shelving system being classified as Applied Art under the Copyright Act. Which means, as you might have guessed, since 2009 String® is considered a work of art that in addition to its timeless modernistic design, has solutions for most storage needs in homes, public environments, and offices.

In conjunction with the relaunch, working practices and methods were carefully reviewed and resulted in the implementation of a new sustainability strategy throughout the organization. Environment, quality, and social responsibility became central concepts and in many cases crucial in decision-making processes such as sourcing suppliers or materials. Our sustainability strategy is continuously reviewed and taken into account on a daily basis.

Over time, additional product groups have seen the light of day and String® has kindly made room in the product portfolio for Works and Museum. Architect Anna von Schewen and industrial designer Björn Dahlström are the creators behind the Works assortment. The idea behind Works came to life through their desire to design sensible and inspiring workplaces with a high level of functionality for both the home and the office environment. Museum came to life on completely different terms. Architect studio TAF, Gabriella Lenke and Mattias Ståhlbom, was commissioned by the Swedish Nationalmuseum to design a console shelf for the museums bust collection as part of the artistic collaboration NM&. String Furniture was commissioned to produce the console shelf and the launch coincided with the reopening of the Nationalmuseum in 2018.